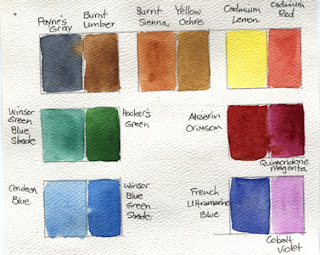 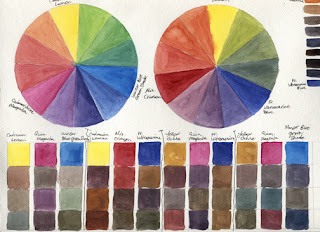 With several upcoming painting projects in mind, it was time to update my watercolor color wheels and palette map. Many years ago I decided to work with a very limited palette of watercolor pigments. Since I do so much travel sketching and journaling, I use a small portable palette and the fewer colors that requires, the better.

I have 14 colors on my palette (top), but the Payne's Gray and Cobalt Violet, both good mixing colors almost never get used. Cerulean blue, Winsor Green (Blue Shade) and Burnt Umber are rarely used too - in fact, those five colors had no place in my color wheel exercise. Burnt Sienna and Fr. Ultramarine Blue I use the most - together they make all the wonderful browns, neutrals and shadow darks you could ever want. The scanner couldn't quite fit the 9" x 12" piece of paper this exercise is on, so the Cadmium Lemon and Burnt Sienna names were cut off the top. It may seem boring, but color wheels are to painting what stocking your pantry is to cooking! It is fun to see how so few colors can make a full rainbow of brights and neutrals. Looking forward to what's to come, now!
Posted by Melissa B. Talma No comments:

I am working on an article for the Rochester Red Wings' 2012 yearbook about the various ballparks that the team has called home throughout the years. From 1908-1928 Rochester's professional baseball club played its home games at a stadium called Baseball Park at Bay Street. The ballpark was located on Bay Street, east of Webster Avenue.


There are many images of this quirky ballpark available online in the Rochester Library's archives. For the article I thought it would be interesting to render the ballpark in 3D based on these images. When finished, it will provide a more complete picture of what the ballpark looked like, since none of the photos show the entire ballpark. Aerial photography was in its infancy at the time and unfortunately no aerial photos of the ballpark seem to exist.

Using a map from 1910 for reference purposes, I was able to create the basic property area to scale in Sketchup. Although not all elements are to scale, the map provided a rough idea of the shape, location and size of the 4 basic structures of the ballpark - a main grandstand, 2 bleachers and an auxiliary building.


Once I had the basic geometry created, I was able to use photos for comparison.


The model is still very sketchy, but it gives an idea of the basic layout and scale of the ballpark. I have a lot of detail to add before it's finished, but it has been a worthwhile exercise to enable me to get a hang of the functionality and features of Google Sketchup.

Once my Bay Street Park model is complete I will likely do one for Silver Stadium (1929 - 1996), and perhaps even Frontier Field if I'm feeling ambitious!
Posted by Paul J. Bielewicz No comments: